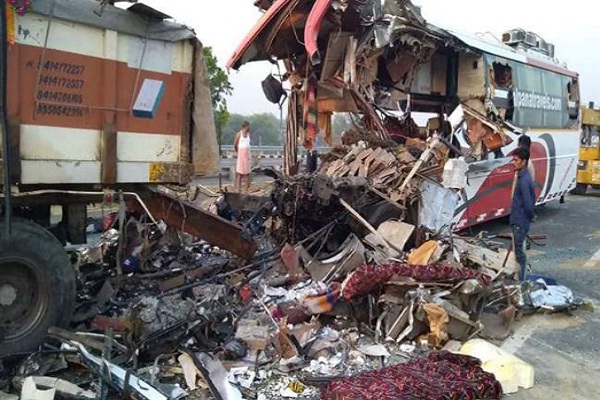 The accident happened in Agra-Lucknow Expressway while most of the passengers were sleeping caused 16 deaths and many injured. The bus was a sleeper bus and in incident happened around night 10 PM on Agra-Lucknow Expressway which was carrying 90 passengers. This accident caused 16 deaths and 35 injured. out of 35, 10 are badly injured and admitted in the Hospitals.

According to the police officials, the bus was on high speed and in the night the driver was also feeling sleepy which caused the accident after collision. The local people helped and rescued from the bus. According a local personnel, the highway is a non parking zone where as many truck drivers never listen to the rules. They just parked their vehicles in the no parking zone. As there is a strict traffic rule still no one pays attention which caused many incidents. A local social activist added that, police should take care of these illegal parking and government should deploy a special patrolling unit which should work and remove the unwanted parking from the road so that these kind of accidents can be easily avoided.

This is the reason Bill Gates inclines toward Android over iPhone