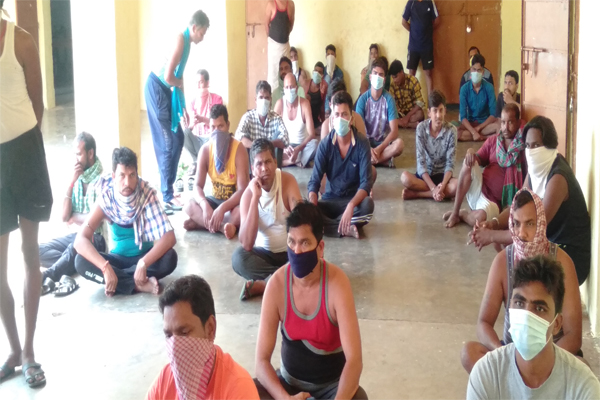 Jatani: Immigrants stranded in various states due to lockdown are anxious to return home. No one has the money to eat, no one can afford to go because there is no transport facility.

“Everywhere you look today, the tide of protectionist sentiment is flowing. Some workers from Jharkhand are stranded at Jatani in such a situation. According to sources, some women and men workers from Jharkhand state have been working as long-term railway workers in Tamil Nadu. Of them, 80 were in five Tata ACE vehicles on March 27 were returning to Jharkhand. However, they were stopped near the National Highway and some in Chhatabar Panchayat and some in Angarpada Panchayat. The four were taken to Bauribandhu College in Chhattisgarh. Others attended various schools in the Angarpada panchayat. However, last night, 12 people from the roof and 12 from Angarpada escaped in a Tata ACE vehicle. Among the workers living at Bauribandhu College, on the other hand, are four women and five children. One of the women was 8 months pregnant while the other was a housewife.