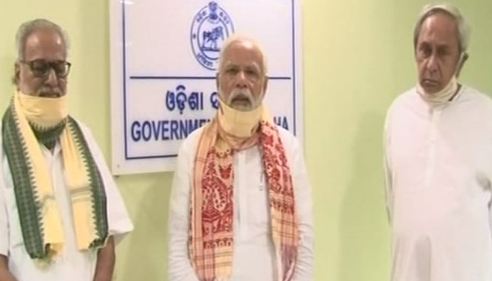 Bhubaneswar: Prime Minister Narendra Modi was on a one-day visit today. During his visit to Odisha, Modi was seen in the air from a helicopter, cyclone-hit area. After having a look at the status, had a review meeting, including the Minister and other authority. At the review meeting, Modi first praised the people of Odisha and the Chief Minister for their response to the storm. However, Modi has announced a Rs 500 crore advance assistance for the damage caused by the cyclone in Odisha. In addition that he said, just as cyclones Odisha government has countered, so he is also obliged to Odisha congratulations to the Government. He also said that in all cases, the central government was shoulder to shoulder with Odisha. After announcing the damage caused by the storm, Modi announced a grant of over Rs 500 crore. As a support amount has been advanced to announce it. The amount was announced after a meeting with Chief Minister Naveen Patnaik. He also demanded an immediate report from the state government. Come very quickly, the central team is to estimate it. Modi said a full plan would be drawn up after receiving the full report.