Home Entertainment Aditya Narayan and Shweta Agarwal are the happiest couple in town and...
Entertainment 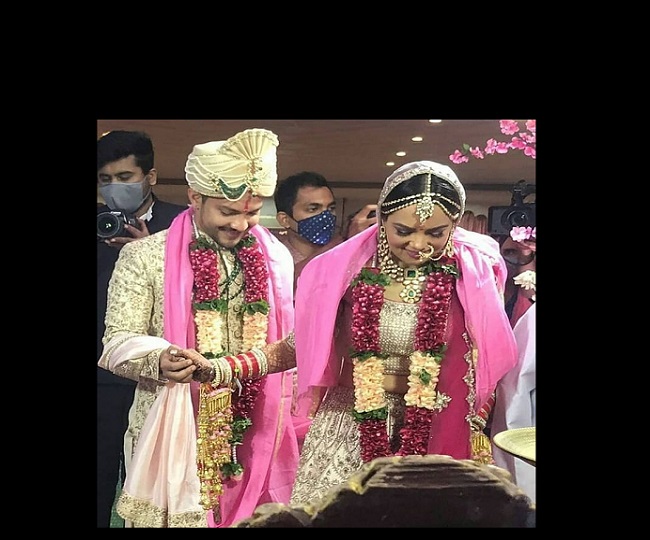 New Delhi | Jagran Entertainment Desk: Aditya Narayan and his long time girlfriend Shweta Agarwal are officially man and wife now as they have tied the knot on December 1, 2020. Well, Indian Idol fame host Aditya Narayan wanted his wedding to be simple but on family’s demand the celebrations were huge and one can get a glimpse of it on social media. We have now chanced upon some rarely seen videos of Aditya Narayan and Shweta Agarwal’s wedding rituals that are hard to miss.
These reel videos have been shared by Aditya’s fan clubs and some famous paparazzi. In one of the videos, the two of them can be seen participating in the ceremony and their families are adding fun to it. In yet another video, Aditya is seen on a sleigh and the Barat is moving towards the wedding venue. Junior Narayan looked phenomenal in his off-white Sherwani and golden print.
Aditya styled his wedding Safa (Pagadi) with green and golden beads broach which looks amazing. He also wore dusky coloured sun-glasses which made him look more astounding. Also, Shweta style herself with twinning colours and jewellery. She opted for an off-white coloured Lehenga with golden and silver coloured sequence stoned on it. Her bridal makeup is just exemplary and the wedding glow added a cherry on the top.
In one of the pictures, Aditya’s father and popular Bollywood Singer Udit Narayan is seen dancing and enjoying the Barat ceremony of his son. There is no denying that both of them are currently the happiest couple in town and these social media posts are proof.

After the first rumours appeared at the beginning of the month, Aditya had kept his fans guessing about whether or not he was getting married to Shweta. The duo did not talk on the matter, neither did they confirm nor did they deny. Now, the couple is happily married and enjoying the post-wedding rituals.