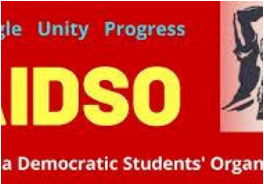 Balangir: The Odisha State Committee for AIDS (AIDS) has strongly opposed the approval of the National Education Policy-2020 by the Union Cabinet. AIDSO Odisha state president Ganesh Tripathi and editor Subhas Nayak said in a press release that the lockout was taking advantage of all the democratic norms and taking into account the views and proposals of student organizations, teachers’ societies and intellectuals. The Education Policy 2020 has been approved for the commercialization, privatization and communalization of education. This policy will help both domestic and foreign capitalists to make a profit. The recommendations for the 5 + 3 + 3 + 4 system in this policy will apply to primary, secondary and higher secondary education.

In this way, Anganwadi will be included in the school for 3 to 5 years as Foundation Courses, 3rd, 4th, 5th Properatory, 6th to 7th, 8th to Middle Stage, Ninth to 12th Second Stage. It is unreasonable to incorporate the first and second grades of primary education into the foundation if it does not complement the Anganwadi education and integrate it into the school.

To dismantle the top institutions in higher education, to form only one-sided HECI, to allow foreign universities to open branches in India, to take steps to introduce online education in the name of digitalization. “It simply came to our notice then. The policy recommends that the syllabus be replaced by various prevailing beliefs instead of scientific education.

This is a very deadly step. The commercialization, communalization, and entrepreneurship of education in the national education policy of the 17th Congress is just one of a series of national education policies in 2020. The main draft of the country’s national education policy, 2020, was strongly opposed. But the government is not trying to democratize the grassroots, but is pushing for more education. Rajendra Rana, chairman of the district’s AIDSO Balangir committee, and Madhusudan Bagh, the editor, have called on the student body to stage a vigorous protest against it before it becomes law.