Chemical spray on workers at Delhi 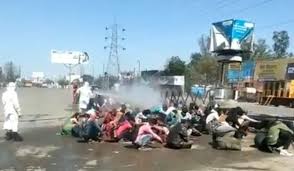 New Delhi: Last Friday, migrant workers to return to their respective states by train. When they were standing for corona virus screening, the migrants were treated with chemical spray. In Uttar Pradesh, migrant workers were cleared off poisoning spray first. And that inhuman thing has happened again. Thousands of workers were standing at Lajpat Nagar, South Delhi. Suddenly the chemical spray happened on them. According to the South Delhi municipal corporation, the workers were standing on the pipe because of which this incident has happened. This chemical was used to sanitise the roads which was fell on the workers present there. No one did it intentionally, it happen mistakenly. Still the officers of the municipality apologised to the workers.