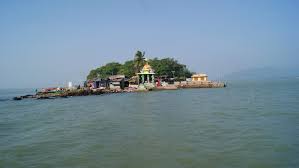 Chilika is the largest lake along the east-coast of India, situated between latitude 190
28’ and 190 54’ N and longitude 850 05’ and 850 38’ E. The Lake is a unique
assemblage of marine, brackish and fresh water eco-system with estuarine
characters. It is one of the hotspot of biodiversity and shelters a number of endangered
species listed in the IUCN red list of threatened species. The lake is an avian grandeur
and the wintering ground for more than one million migratory birds and is a Ramsar
site. The highly productive eco-system of the lake with its rich fishery resources
sustains the livelihood of more than 0.20 million fisher folk who live in and around the
Lake. Some of them live at the subsistence level. To understand the ecosystem,
different parameters were monitored to help in management of the lake today. The
annual monitoring was done by 18 teams comprising of nearly 100 personnel from
morning 6 to 12 noon consisting of Officials of CDA and Government officials.
Irrawaddy dolphin is the flagship species inhabiting the Chilika Lake. The PRESENT
distribution range of this species is only in Asia, from Chilika to Indonesia . Irrawaddy
dolphins in India are protected under Wildlife (Protection) Act 1972, ClTES
(Appendix-l) and IUCN Red List.

Observation of Irrawaddy of dolphins in Chilika Lake; 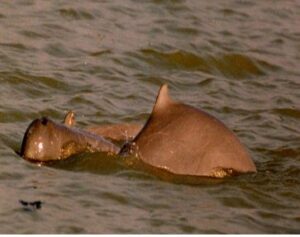 Chilika Development Authority (CDA) has initiated many conservationmeasures for the protection and conservation of Irrawaddy dolphins in the past in close coordination with Wildlife Wing of
State Forest Department. In the past there had been survey and identification of dolphin habitat in
the lake for proper management, dolphin watching protocol were formulated, sensitization training
of tourist boat operators were conducted, widening and deepening of Magarmukha channel was undertaken for free movement of dolphin from Outer channel to the main lake. The annual population estimation survey of Irrawaddy dolphin of has been conducted by CDA since 2003 .
Today the annual survey was conducted by “Transact Survey Method”
followed worldwide for population of aquatic mammals. Each survey team was
equipped with binoculars, GPS, Range finder and data recording sheets etc. This year
there was total sighting of 156 nos. Exact figure will be released by PCCF(WL) after
exact census in this regard. The movement has been facilitated by clearing of Gherries
at places. One significant population is now observed in Sourtern sector, by moving
from other sectors.
Dolphin population in Chilika lake from the year 2013 to 2020 is as below;
Year Dolphin Population
2013- 152 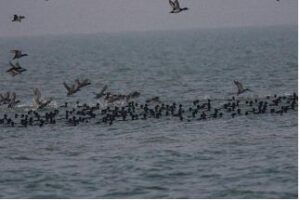 A total of 12,42,000 individuals of 105 water bird species and 26,405 individuals of 76 wetland dependent species were counted from the entire lagoon on 5th January 2021.The survey today validated this data and a population of 1 million plus is estimated. This year, more birds are found in Central and Southern sectors of Chilika.Sudden increase in the population of open water preferring diving ducks was noticed during the current season, particularly in the prawn gharries evicted areas clearly indicating the beneficial impact of eviction for migratory birds. The diving birds, which need undisturbed extensive areas for feeding was made available through eviction carried out by the Chilika Development Authority. The number of waderer have increased across the lake compared to the census date. 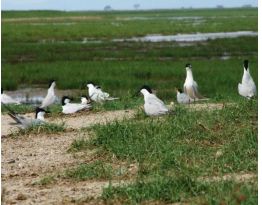 Lesser Flamingo, Ferruginous Pochard and common Shelduck were encountered after a long gap.

Studies on the seagrass of Chilika Lake

During the Flora and Fauna Monitoring of Chilika Lake on 15th January 2021, five species of seagrasses were reported. Seagrass species such as Holodule uninervis, Holodule pinifolia, Halophila ovalis, Halophila ovata and Halophila beccarii
were recorded during the survey. This occurs over an area of 155 sq.km, increase
from 152 sq.km. of last year. These Ecosystem Engineers have brought cheers
against the declining trend throughout the world and now Chilika has 22% of India’s
sea grass area.

During Pandemic few net gherries have been reconstructed though of smaller quantity.
Respective district administration will be intimated of the exact status and location
necessary action as the matter is Subjudice before the Hon’ble High Court of Odisha

CDA thanks the media and express its gratitude for supporting the causes of the lake
by communicate the information to public at large. We except the media to highlight
the annual survey report 2021 for the benefit of all concerned.