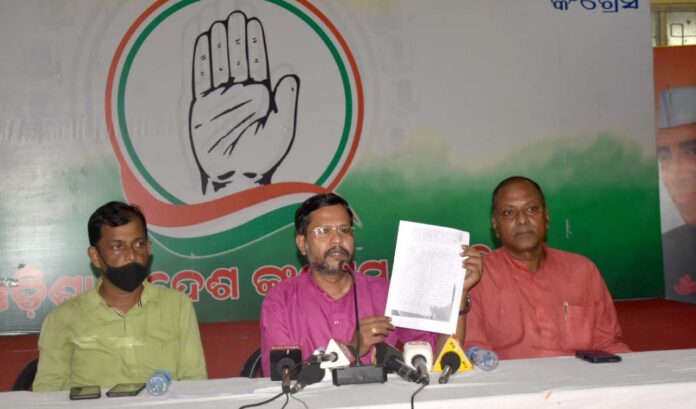 *THE GROSS VIOLATION OF THE DISTRICT MINERAL FOUNDATIONS RULE, 2015 IS THE PRIME CAUSE OF UNDERDEVELOPMENT OF THE GRAM PANCHAYATS.*

 The basic purpose of creation of the District Mineral Foundation fund is not fulfilled in mineral rich districts of odisha since its inception alleged by the PCC spokesperson Prasant Satapathy in a press meet today at Party office in Bhubaneswar.
 The Mines & Minerals (Development and Regulation) Act, 1957 with certain amendments in 2015 resulted in framing odisha specific Rules in the year 2015 and the provisions laid down in Rule 10, 11, 12 & 16 are grossly violated by the BJD lead odisha govt.
 The funds of the DMF shall always be utilized for the permissible activities as mentioned in Rule 10 for the interest and benefit of the persons living in areas heavily affected by mining related activities. Development in the sectors like – Health, Education, Water supply, Electricity supply, Road connectivity, Irrigation, Sanitation, afforestation & Environmental improvements etc should be carried out for the people living in mining affected villages/panchyats by utilizing the DMF fund. But its very pity to say that the DMF funds are diverted to certain other sectors of different mineral rich districts. The govts announcement to built one international hockey stadium in the Rourkela city of sundargarh dist is one such example of fund diversion. Instead of utilizing the budgetary allotment for sports, the BJD Govt is misutilizing the funds of DMF exclusively meant for mining affected rural areas. Also in the year 2017 the DMF fund is diverted to works related to power supply to Jharsuguda Airport. In another instance the district administration purchased 25 patroling vans for Rourkela police and construction of boundary wall of circuit house and smart traffic management signaling system at Rourkela which is a non mining affected area.
 This is pertinent to mention that when the budgetary fund allocation meant for different depts are not utilized fully for the concerned financial year, the off budget funds like DMF is misutilized heavily. It is really worrisome because this comes at a time when the state’s own people living in the mining-affected areas are crying for attention and seeking help for basic amenities in their areas after living in poor and vulnerable conditions for decades, the DMF fund which is collected in thousand crores of rupees is not spent for them.
 According to the Union Coal and Mines Minister Pralhad Joshi, Odisha has seen the highest collection of Rs 11,984 crore as District Mineral Foundation collections from the miners operating in the state since the inception of funds in 2015. As mining firms grow, the local community impacted by mining does not get any benefit from the money collected. In fact the local environment is impacted heavily but the governments often divert these important resources away from the vulnerable community. They try to use the funds for works where ideally budgetary allocations should have been used. These funds were planned for the upliftment of the affected community for their health, education, livelihood and others.
 When Collectors of the concerned districts dispense and divert DMF fund for various urban-centric works, knowing that they are not annual budget funds, they can be accumulated and do not lapse. They can be used when needed. The need is to make priority-based plans to aid the mining-affected people.
 People of the mining affected areas are living in hazardous condition because of the air pollution, water pollution and sound pollution too. Pollution due to mining activities leads to serious health problems and people of the concerned villages and panchayats are suffering from diseases like cancer, TB, lungs infection, skin disesse etc but the BJD govt has never utilized the DMF fund to provide better health care facilities to the affected areas.
 Sundargarh- sanction-6976.98 crore Release – 1004.51crore Utilized- 692.25 crore.

 Demand- 1. The detail list of the developmental work undertaken by the govt. for the people living in mining affected panchyats shall be displayed in the concerned panchyat offices to make the people know about the works.

2. Panchyat wise List of developmental work should be displayed in a proper place in the concerned Block office of mining affected areas.
3. The Govt. of Odisha should be recommend for CAG audit of the DMF fund trust.
4. we urge the BJD Govt to give a detail list of the total receipts of the DMF Fund year wise along with its sanctioned amount and utilization amount for the developmental activities undertaken as per Rule-10 for each panchyats situated in different districts affected by mining operations.