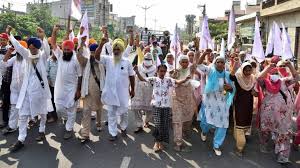 The recent events in farmers’ markets and neighboring areas such as North Dakota, Kentucky, and other traditional agricultural communities around the country are highlighting a major rift between corporate interests and working-class rights to meet basic needs. The issue is corporate control over the political process and attempts by Congress, the White House and the Obama administration to weaken the power of local farmers and rural America. At issue is the recent Agricultural Futures Association report that “outed” new food regulations (remember those) that Obama wants passed. These new policies will impose higher premiums on farmers and ruffle farmers’ rights to fair market compensation for wrongful death and illness claims by farm workers who get injured or die on the job.

These policies will destroy the economic foundation of our family farms and displace thousands of rural households from their homes and communities and force them into cities, where they will compete directly with those families who own and operate small businesses. Is this really the America we want? What about the wisdom of “American first?” How do we promote rural development when government policy forces us to abandon the principles that have brought us so far as a nation? In my view, our current farm bill should be rejected in its entirety, and the RSC and other special interest groups that support this legislation should be boycotted.

There are three areas that I think the Farmer Protest of 2020 will focus on. The first is the suppression of fair trade and organic practices on the part of large agricultural producers. They have come under fire from organized labor and progressive groups for discriminating against farm workers when hiring. The second is the attempt to use the “emergency bill” process to circumvent the normal rule-of-thirds in U.S. politics. This is unprecedented, to say the least, and deserves our attention.

The third area is farmers’ rights to fair compensation for workers who have met with death or illness on the job. The bill will eliminate the requirement that workers notify their union of any accident or death that has occurred at work. This is obviously a step in the right direction, but the proposed law would also eliminate the requirement that the employer verify that the accident or death actually occurred on the job. This would allow companies to Dodge safety regulations without even providing the correct insurance benefits to the deceased farmer or injured employee.

These three issues are among many that have united many groups of farmers throughout the country. However, what is troubling is the lack of dialogue that occurs between organized labor, the Obama administration, and the major farm industry. Groups such as Cesar Millan, bestselling author and environmentalist, are often ignored by the press and political establishment. The media portrays these sorts of protests as isolated events, but this is not the case. The Farmer Protest, like all other protests, is an indication that things are not getting better for the farmers or rural workers who have come under attack from big business.

When you read about the lives of these deceased farmers and laborers, it is not hard to see why they must be considered an important part of the American story. This is especially true when one considers that, in some cases, their lives were taken because of corporations whose only interest was to make money off of the land and the people who lived on it. As Abraham Lincoln once said, “Lincoln did not become a man; he became a horse.” This is a very relevant lesson, one that we must remember today as we debates the need for stricter regulations on food producers and those who produce them. If you agree with the Farmer Protest, make sure to support those who are engaged in this type of action in the future.