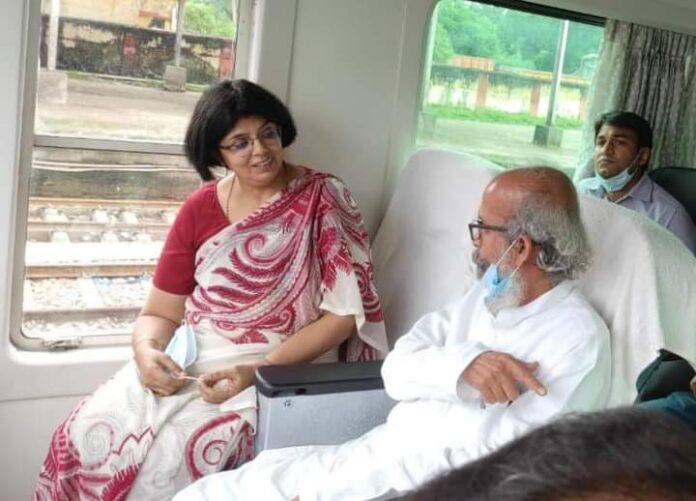 Had a detailed discussion with Archana Joshi (IRTS)-General Manager, South Eastern Railway(SER) and Mr. M Pradhan- DRM Kharagpur Division and other officials of the department regarding various devlopmental activities of various railway stations in my constituency.

1)Since Balasore is a historic city having colonies of British, French, dutch and other foreign countries and many places of historical, mythological and tourist important like Panchalingeswar, Khirochora Gopinatha, Ajodhya, Durgadevi,chandaneswar, Talasari, kuldiha century, Chandipur Sea Beach with ITR and DRDO and is the birth place of great luminaries like Fakir mohan Senapati, Radhanath Ray, Mahatma SridharSwami, Baladev Bidya bhusan, Chandramohan Maharana and others . The new station building should have a historic look reflecting our great and glorious cultural heritage. Besides, there should be all modern amenities like guest house, canteens, Shopping Malls, Travels counters etc.

2)After the amalgamation of truncated Kashmir Nilgiri is 1st among the princely States to get merged in the Union of India. To commemorate this historic incident the 1st war vessel of free India was named “INS NEELAGIRI” so the goods station of Nilgiri may please be converted in to a passanger station so that the poor people especially tribals will be benefited.

3)Improvement of station side roads.

4)Upgradation of all the stations from Jaleswar to Soro and form Betanati to Balasore and increasing the hight of all the platforms.

5)Completion of 3rd line work as quickly as possible which has been inordinately delayed.

6)starting the work of 3 over bridges already sanctioned

9)Booking counter in both sides of Balasore station and two ticket counters at Nilgiri and Betanati.