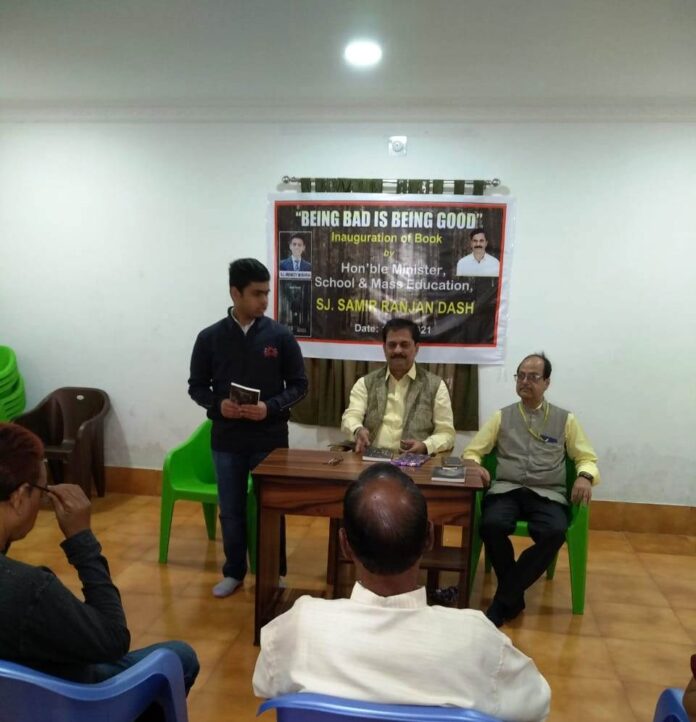 Bhubaneswar : Child prodigy of Odisha, writer Shri Memoy Mishra, has been praised & felicitated by Hon’ble Minister of School and Mass Education, Odisha, Shri Samir Dash for his internationally acclaimed debut book ‘Being Bad Is Being Good’. While inaugurating the book at Bhubaneswar, the Minister has read out the message given by the child writer for all children and youths through his book.
“On what slender thread does one’s life hang?” With this feeling, the writer has written that –
Rather than leading a normal life as any kid, he is forced to grow up as a fierce person, serving as an instrument of death, though he hates such a life. He tries to step out but is caught in a tangled mess of problems.

This piece of work portrays a person who kills much against his will and, eventually, tries to
stop, but does he attain peace in his life in the end?
During early boarding at The Scindia School, Gwalior, Madhya Pradesh, in Class VII, at the age of only 12 years, he has written this book. With infalliable faith in God and to be Good, Memoy has given message to all children and youths to become ‘SOMEONE from NO ONE.’
This piece of work – Thriller is so beautiful and rich in content that International Publisher –
Austin Macauley, Lodon has published this book, both paper bound and e-book on June 27,
2019 from Europe, America, Canada and Australia. Now, the book is reviewed and available in several international book stores, book fairs and hosted in more than 100 websites including Amazon marketing portals.
Resident of village Birapurusottampur, Puri, Odisha, Memoy is son of Smt. Chinmayee (Bank of Baroda) & Dr. Dukhishyam Mishra (Small Industries Development Bank of India)
Since early childhood, Memoy is a good scholar and has strong bonding with pen and has been painting many imaginary tales, short stories, recitals, diegesis, etc. Now, he has passed out 10th exam with first class first in The Scindia School Gwalior (97.40 per cent) and is continuing there in Class XI. He has dedicated his success of this book to all his teachers, seniors, friends, family members and his readers