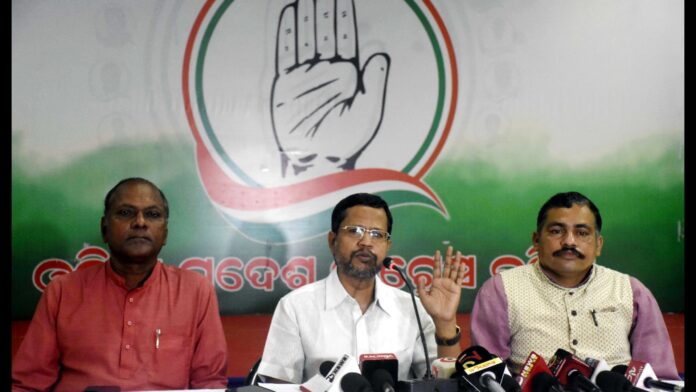 – Congress demands white Paper on the loan incurred by the state govt, its rate of
interest and area of utilization.
– Per capita income is decreasing: per capita loan burden is double fold in a decade￾BJD Govt is in jeopardy.
– Odisha is heading From Loan Burden to Loan cage.
Bhubaneswar : In the ongoing assembly session, the
statement made by Honble Finance Minister in the assembly regarding the loan
burden of each individual of Odisha state, shows the poor financial condition and
deteriorating fiscal health of the state alleged by the Odisha Pradesh Congress. In a
Press meet today, Party Spokesperson Prasant Satpathy in State Congress Head
quarter at Bhubaneswar lashed out the ruling BJD Govt for fiscal mismanagement.
He said that the ruling BJD who continuously enjoying power for last 21 years has
grossly failed to create permanent assets for the state. The per capita loan burden
of a poor state like odisha has been doubled during a decade. When in the year
2011-12 the loan burden was Rs. 9144/- now touched a new height of Rs. 23,761/-
in the year 2021-22 is not at all acceptable. What is more worry some is the state’s
total debt burden will still have an upright movement and at the end of this
financial year it will be Rs. 1,22,917/- crore. In 2019 when the per capita loan was
18228/- in the year 2020- it became 23524/-. The BJD govt’s pleading that
because of the budget size debt burden is increasing staying within the norms of
Fiscal Responsibility & Budget Management (FRBM) Act looks ridiculous. The odisha
govt is spending more than Rs. 50,000/- crore towards administrative expenses
which is lesser than the state’s own income and thus the govt is entirely dependent
on the loan to execute its populist measures like KALIA Yojna and etc.
Mr. Satapathy said, We are not against making loan for a growing economy
but certainly we are against its improper utilization. The BJD rule govt in the state
has failed to make appropriate capital investment & to create any long term assets
by utilizing the loan taken from different agencies. Before 12th finance commission
the permanent interest rate was 14% & 18% which was reduced after 12th finance

commission’s recommendations and now its 3%, 5% & 7% but the loan taken by
the odisha govt is not invested in the valuable sector from where the govt can earn
its own revenue & can create employment opportunity for unemployed youths. The
last 21 yrs has seen 15 thousand closed MSME’s in the state where as the CM
assured in the year 2015 that newly set up MSME’s will get 25% subsidy on capital
investment is not worked out till date. We have information that state govt is
spending 97% of its loan in such areas where long term income generation for
state’s exchequer cannot be expected at all and that is the reason why lakhs of odia
people travel as migrant labourers to other states to earn their livelihood. In every
budget there is provision of capital investment but within last ten years no such
investment was made and in fact loan amount spent for the administrative
expenses. There is no thrust on value based agriculture / horticulture / floriculture
in the state. This is really worrying that the financial health of the state is not good.
The press is attended by spokesperson Manoranjan Dash & Padmakar Guru.
Congress Demands-
¾ white Paper on the loan incurred by the state govt, its rate of interest and area of
utilization
– The govt which is ruling constantly & continuously for last 21 years should declare
in public about the state’s income earned by utilizing the Loan into the capital fund.
– Urge the Honble CM and the Finance Minister to present a clear picture before the
people of odisha about the amount of loan taken from central govt and its area of
expenditure in the state.