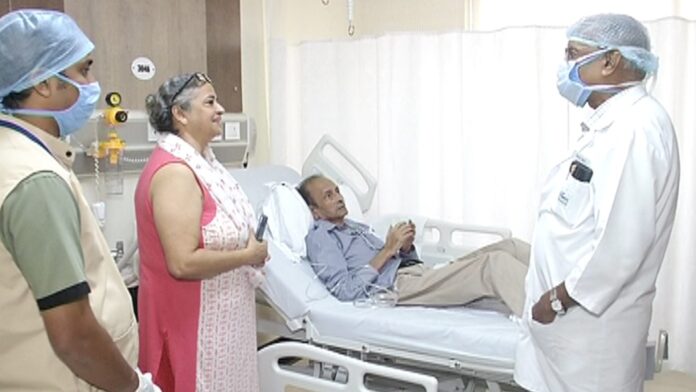 Bhubaneswar : Even as the grim battle against the Corona virus

continued for more than 18 months, most people were puzzled about those who

against the infection getting the disease.

treatment, a team of experts at the SUM Ultimate Medicare (SUMUM) here said

Prof. Banambar Ray, Head of the department of Critical Care Medicine in

the hospital, told newspersons that death occurred in about two per cent of the

long treatment. Of the total patients, around five per cent were getting critical

while between 12 to 15 per cent needed hospitalization.

no symptoms did not require any hospitalization,” Dr. Ray said.

Prof. Ray said when a fully immunized person was infected by the virus it

broken through a protective barrier provided by the vaccine.

Individuals with weakened immune system were at higher risk of getting

breakthrough infection because the vaccine was less effective in such cases, he

Patients who had been infected in spite of having been immunized

of the treating team comprising doctors, nurses and paramedics. All the

departments extended their support in this ongoing battle against the pandemic,
he said.
The two patients were 72-year-old Mr. Gautam Buddha Mukherjee, a
retired senior bureaucrat, and 21-year-old engineering student Mohammed
Shafaq Ali. Mr. Mukherjee, who had co-morbidities, had spent 16 days in ICU as
his oxygen saturation level remained low. He was treated for nearly two months
in the hospital as he suffered from long Covid, he said.
Treatment of Mr. Ali was a greater challenge as the patient remained
critical for a long time. He was on ventilator and a tracheostomy was needed to
be done as the lungs were in bad shape. “Treating this patient was very difficult
but we are glad that we could successfully bring him around,” Prof. Ray said.
He said the critical care and microbiology teams received full support from
Cardiothoracic surgeon Dr. Banabihari Mishra, Consultant in the general
surgery department, Dr. Satyajit Rath, Senior Clinical Nutritionist Ms. Sushree
Sangita Jena and Physiotherapist Mr. P. Balakishore.