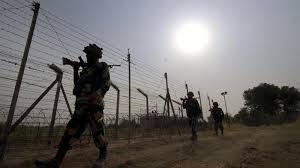 The Jammu and Kashmir Police professed to have recuperated huge amount of arms and ammo close to the Line of Control (LoC) in north Kashmir’s Keran part.

The police said that dependent on a solid information a joint inquiry activity was propelled by Kupwara Police and the Army’s 6 Rashtriya Rifles in Keran town and timberland zones along the LoC.

Reviewer General of Police Vijay Kumar affirmed that during the brushing activity huge amount of arms and ammo were recuperated from a weapons dump.