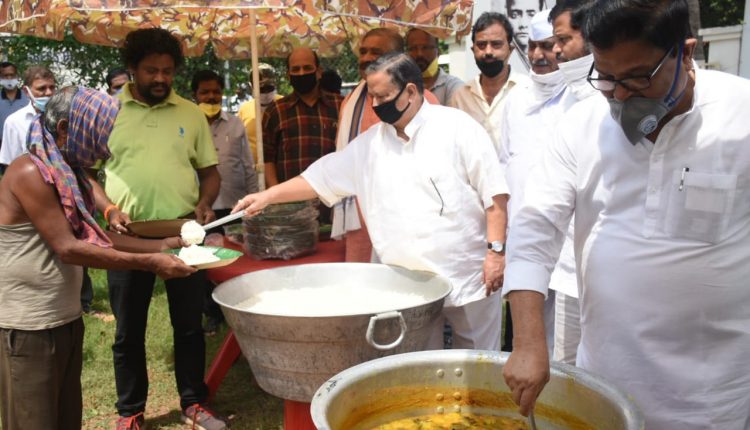 Bhubaneswar – A poor Narayan service has been organized by Sanjuna Kaher, president of the Bhubaneswar Medium Youth Congress, on the 27th death anniversary of the late Rajeev Gandhi, the former Prime Minister of India. It Pradesh Congress Committee president Mr. Niranjan Patnaik rotated during this epidemic fussy, caused by poor-lasting, small children and the ladies broiled for food. On the occasion, the PCC president lauded Sankuna Kahar for his tireless work and called on the youth to come as warriors and help the people during the corona epidemic. It is to be noted here that from the first day of the proclamation of the lockdown in the state of Sankuna Kahar, for almost two months to the present day, essential dry food, cooked food as well as masks and sanitizers have been feeding the poor. Today this event MLAs Suresh Kumar Routray, Jaydev Jena, former PCC president, among others, leader of the Congress, including the Shubhendu Mohanty, Gyanadeba Behura, Sibananda Ray, Kishore Jena, Deepak Kumar Mahapatra, Chinmaya Sundar Das were present.

Facebook
Twitter
Pinterest
WhatsApp
Previous articleThe number of coronary cases in the state will exceed 10,000 by June
Next articleLetter to Naveen from Niranjan: 30 trains needed to bring back the migrant Odiyas