SENSE OF FEAR APPEARS TO HAVE GRIPPED THE SOCIETY: JAYANTA MOHAPATRA 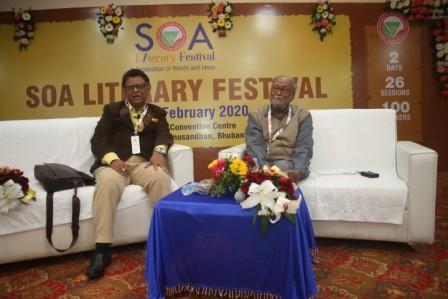 Bhubaneswar: A sense of fear appears to have gripped the society as the situation has undergone change in recent times, Mr. Jayanta Mohapatra, the first Indian to win the Sahitya Akademi Award for English poetry, said on Saturday.
“The situation is not what it was a few years ago. The sense of freedom which I used to experience personally has disappeared,” Mr. Mohapatra said while participating in a ‘Face to Face’ programme at the two-day 1st SOA Literary Festival which concluded at the SOA Deemed to be University here on Sunday.

“Whatever that sounds illogical has become logical today. I don’t like it,” he said in an oblique reference to the current situation in the country involving protests by students and others and the face-off with the police.

In an interaction with Dr. Dipak Samantrai, the celebrated 91-year-old poet walked down the memory lane while expressing his love for mundane things like the sunshine, moonlight, birds and flowers. “I always wait for sunshine to light up my life,” he said adding he didn’t like the idea of an overcast sky.

Asked about his daily routine at this age, Mr. Mohapatra said he was primarily confined to his home in Cuttack and worked at his desk. “I spend my day learning new words,” he said adding he picked up his vocabulary from the school library where he spent most of his free time as others bullied him in the class.

“The only recourse left for me was to go to the library and pick up a book. I picked up my vocabulary from reading,” he said.

Though he had to spend most of his time alone, he said he was not bored. “I am not bored. I don’t understand why young people get bored. There are so many beautiful things in the world to excite us,” the poet said adding he greatly relished his favourite ‘Dahi Bara-Alu Dam’, a culinary delicacy of his city.

Recalling his foray into creative writing, Mr. Mohapatra, who taught physics for long years, said he began writing short stories at the age of 22 but the Editors to whom he forwarded his stories for publication returned them with rejection slips attached. Finally, it was The Illustrated Weekly of India edited by late Khuswant Singh, which had a big circulation at one time, chose to publish his writings.

“I never ever wanted to be a poet, but perhaps my experiences of an unhappy childhood made me a poet,” he said adding he didn’t write for himself but others. “If my works could touch ten people, I am happy,” he said.