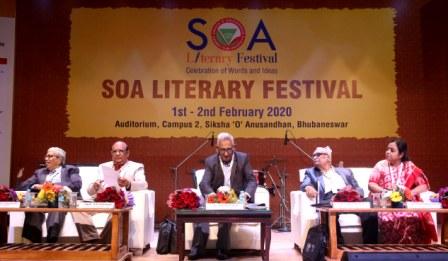 “The idea that poetry which is difficult to understand is high quality stuff borders on the ridiculous. Somehow, we have come to accept this thinking,” he said while speaking at the valedictory function of the literary fiesta organised by the SOA Deemed to be University.

Poetry, the celebrated litterateur said, should be easy to comprehend for the reader and the poet should keep this in mind.

Eminent Gujarati poet Dr. Sitanshu Yashaschandra, who presented the key note address at the inaugural function on Saturday, called for opening up space for questioning, interrogation and dialogue in Indian literature saying it was getting gradually squeezed.

“Events around us show that the space is getting squeezed. What is the crisis of our times? What is the crisis any author of substance is faced with?” he said adding what was ‘attractive’ was masquerading as ‘authentic’ and what looked ‘splendid’ and ‘spectacular’ was often not ‘sensible’ and ‘significant’.

The inaugural function was also addressed by Dr. Vasdev Mohi, eminent Sindhi poet who has been nominated for the prestigious Saraswati Samman this year, and Dr. Dnyaneshwar Mulay, eminent writer and diplomat.

“This festival lived up to its tagline ‘Celebration of Words and Ideas’ and has been a huge success,” said Mr. Kuldeep Kumar, eminent Hindi poet and journalist.

“Elsewhere, we see the celebration of celebrities, but here we witnessed focused attention on the state of the Indian literature and discussion on how to improve things,” he said.

The literary fiesta, spanning 27 sessions over two days, was organised by the SOA Centre for Preservation, Propagation and Restoration of Ancient Culture and Heritage of India (PPRACHIN), an initiative of the SOA University. “This was a first time for us and the experience we have gathered will stand us in good stead when we hold the next one,” Dr. Gayatribala Panda, Head, PPRACHIN, said.

Dr. Mohi said though literature was often referred to as the mirror of the society, it was not so in reality. The mirror reflected the truth while literature was a mixture of reality and imagination, he said adding it was for the writer to strike a balance between the two.

Dr. Mulay, also an eminent diplomat, said literature should take advantage of the advancement in technology to take language to every corner. “Now we have the software for every Indian language which has to be put to use,” he said while regretting that the television had now replaced the book shelves in most houses.

Two eminent writers, Mr. Tarun Kanti Mishra, and Mr. Kali Charan Hembram, who have been nominated for the Kendriya Sahitya Akademi awards this year, were felicitated on the occasion by the Vice-Chancellor, Prof. Chauhan.
Mr. Mishra, who was Odisha’s former chief secretary, has been chosen for the Sahitya Akademi Award for his book ‘Bhaswati’ while Mr. Hembram, who writes in Santali language, was chosen for his work ‘Sisirjali’.