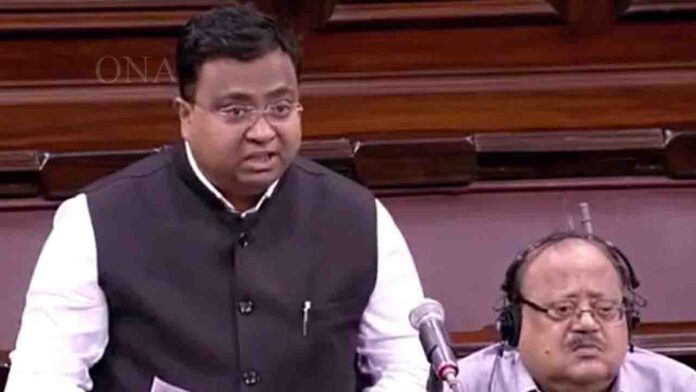 House. Speaking during the Zero Hour, Dr. Patra said that Odisha is

progressing and developing under the leadership of Hon’ble Chief Minister

Shri. Naveen Patnaik. Odisha has been facing natural disasters on a

affect the economy of the State. He demanded that through this Special

Focus State status the Government of India should change the financial

sharing pattern of Government programmes between the Centre and the

disaster on the State. He stated that the sharing pattern should change

Dr. Sasmit Patra informed that the Government programmes have a

sharing pattern of 60:40 ratio in which 60% funds are provided by Centre

and 40% is provided by State. If the State’s administrative costs for

running such programmes is added, then the ratio comes to 50:50

between the Centre and the State. But when a natural disaster strikes

Odisha, this sharing pattern should be changed to 90:10 with 90% by

the infrastructural development and rebuilding of the affected regions of the State.

Dr. Patra informed that this demand for Special Focus State status for
Odisha had been placed by Hon’ble Chief Minister of Odisha Shri. Naveen
Patnaik before the Government of India on various forums. He had
requested that the sharing pattern change to 90:10 ratio between Centre
and State for a period of 3 years from the date of incidence of a natural
disaster on Odisha.
The BJD Rajya Sabha further highlighted the issues of development in the
KBK region of Odisha comprising of the undivided districts of Kalahandi,
Bolangir and Koraput where there is a need for increasing the banking
density, tele-density and internet-connectivity. All of these regions also
need additional support and assistance by the Centre.
In closing, Dr. Patra demanded that in order to ensure the development
of States like Odisha which face natural disasters, there is a need to
provide Special Focus State Status to Odisha which would help in
developing the infrastructure of the State after being ravaged by a natural
disaster. He hoped that as requested by Hon’ble Chief Minister Shri.
Naveen Patnaik, the Government of India would consider his request
seriously and ensure Special Focus State status for Odisha.

Speech of Chief Minister Shri Naveen Patnaik for the Launch of AMRUT 2.0 & SBM 2.0   Odisha has always focused on the wellbeing of all...
Read more
India

Chief Minister,sAddress At Union Home Minister's Review of LWE Affected States   New Delhi: At the outset, I would like to thank the Hon’ble Union Home...
Read more