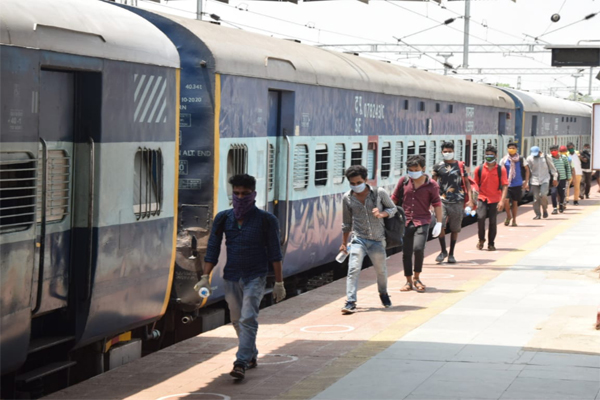 Nuapada: A total of more than 1,600 migrant workers have landed at various railway stations in Odisha and neighboring Chhattisgarh in the Nuapadha Sadar sub-divisional railway station on a special train from Telangana. The district administration has set up five counters at the station to register migrants. The train was carrying 538 workers from Nuapadha district, 162 from Kalahandi district, 181 from Baleshwar district, 9 from Sundergarh district, 9 from Jharsuguda district, 9 from Sambalpur district, 3 from Devgarh district, 943 from Mayurbhanj district and 30 from Bargarh and Balangir districts. After registering 538 migrants in the district they were released from bus stops in various blocks of the district. The area was cleared by the Nuapada NAC as migrant workers left. Food packets and water bottles were arranged by the administration for the immigrants.

Under the supervision of Nuapadha District Magistrate Madhusmita Sahu, SP Bineet Agrawal, Additional District Magistrate Suryamadhab Panigrahi, Deputy District Magistrate Taranisen Naik, DRDA PD, Nuapadha NAC Executive Officer. More than 100 employees, including Ramchandra Majha, RTO Prashant Parida, Tahsildar Devendra Raut, Bido Subedar Pradhan and various officials of the police department, were deployed. Under the leadership of SP Shri Agrawal, a large police force was deployed in the district headquarters sub-division to monitor the law and order situation. After registering other workers, they will be flown to their district by special bus. “It simply came to our notice then. Section 144 was issued to control the law and order situation. All shops and markets in the Nuapada sub-division have been closed by the district administration. It is learned that the workers of the district will be sent to their respective areas. The district administration, on the other hand, is worried about the influx of workers.