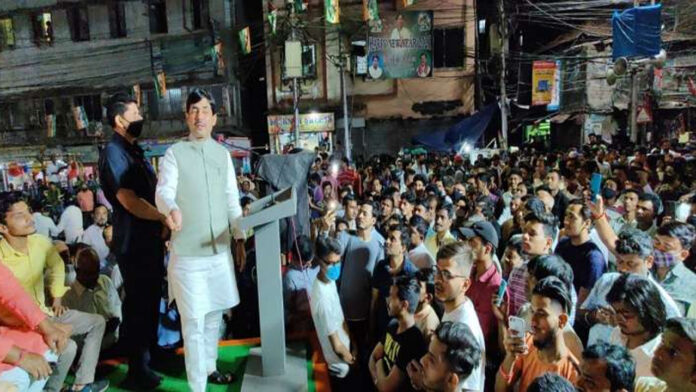 West Bengal: Stones ‘pelted’ at Shahnawaz Hussain in Howrah, BJP pioneer Shahnawaz Hussain asserted that stones were pelted at him in Howrah on Tuesday night when he was lobbying for the West Bengal gathering political race. The BJP pioneer posted via online media a video where he was seen showing two stones to the official on the job and censuring the TMC for the supposed occurrence.

“TMC labourers pelted stones on me while I was tending to a gathering at Muzzafar Chowk,” Hussain tweeted, saying he was protected and the gathering labourers had held up an objection. “Unmistakably TMC realized it is losing and thus is getting urgent,” Hussain said.

“I, at the end of the day, went to the Golabari Police Station and asked them for what good reason police staff were not sent by my Y + CRPF cover security convention. Unusually, they had no responses for that.” In his grievance, Umesh Rai, the BJP up-and-comer from Howrah North, named not many people behind the assault, asserting they were completely known TMC men nearby.

Stones ‘pelted’ at Shahnawaz Hussain in Howrah, Police affirmed the housing of the FIR and the visit of Hussain to the station, adding that the supposed occurrence was being examined. The TMC denied any association of its labourers and said the BJP was arranging a “show” to stand out enough to be noticed as the roadshows and gatherings of the saffron party were “coming up short” to draw swarms.

Prior to Sunday, a roadshow went by Hussain and Domjur get together competitor Rajib Banerjee was halted by police at Bankra territory on the ground that there could have been no previous authorization. Both Banerjee and Hussain had fought the activity of the police.