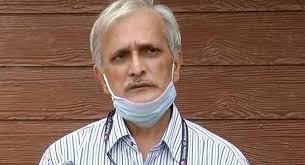 Bhubaneswar: Seventeen-year-old Shanmugam Anitha, who topped the plus two examinations under the Tamil Nadu State Board three years ago, committed suicide just because she could not get a seat in any medical college.

Anitha had secured 1176 marks out of 1200 in the plus two exams and was a brilliant student, but ended her life because she thought that her dream would never be realized, eminent neurosurgeon and Vice-Chancellor of Siksha ‘O’ Anusandhan (SOA), Prof. Ashok Kumar Mahapatra said while interacting with students.

‘Was it necessary for her to end her life just because she couldn’t become a doctor? he asked.

The eagerness to give shape to one’s ambition and the associated anxiety culminated in depression which led to suicide and more cases were coming to the fore these days, Prof. Mahapatra said while delivering the first SOA Fortnightly Academic Lecture (SOFAL) which kicked off on Saturday.

A person must understand that failure to secure a seat in a medical college was not the end of the world as there were many other avenues to channelize your talent and knowledge, he said adding young people should realize this as also their parents who pressurized them to achieve goals fixed by them.

Speaking on the theme ‘Healthy Lifestyle’, the Vice-Chancellor said keeping in view the psychological state of young people who encountered tremendous stress to succeed in life, the central government had launched the National Mental Health Program in 2005.

Prof. Mahapatra, who was the first Director of the AIIMS at Bhubaneswar, said it had been found that 48 percent of students who succeeded in getting an MBBS seat at AIIMS were found to be depressed. “Notwithstanding their academic success, they suffered psychologically. It has got to do with their mental health,” he said.

“Most students don’t have a balanced work-sleep cycle as they keep awake till 2 am. They may be brilliant students, but no one told them to lead a disciplined life,” Prof. Mahapatra said while pointing out that schools were least interested to monitor the mental health condition of children.

“What most schools were interested in was the success percentage of Class 10 and Class 12 students passing out their exams,” he said.

“Success in life does not mean a lot of money as it could not buy you health or happiness,” Prof. Mahapatra said adding young students must have eight hours of sleep and should not overeat.

Stating that a survey in Delhi had found that 15 percent of school children under 15 years of age had begun to smoke and drink, he said it was most important to realize that the parents were the real mentors of the child and they should not expect the schools to shape the lives of their children.

There was a huge need to inject in young students the realization that spiritualism mattered in life. “It was important for parents and teachers to know that spiritual inclination can help,” he said while recommending Swami Chidananda’s book titled ‘Choice Is Yours’ to all students.

In a world where people wanted to get something without having to do anything, it was hard to come across persons who would volunteer to do something, Dr. Kar said adding the spirit of volunteerism needed to be inculcated in students.