The central and state governments demanded the revocationof the 12-hour work order. Protest on behalf of INTUC 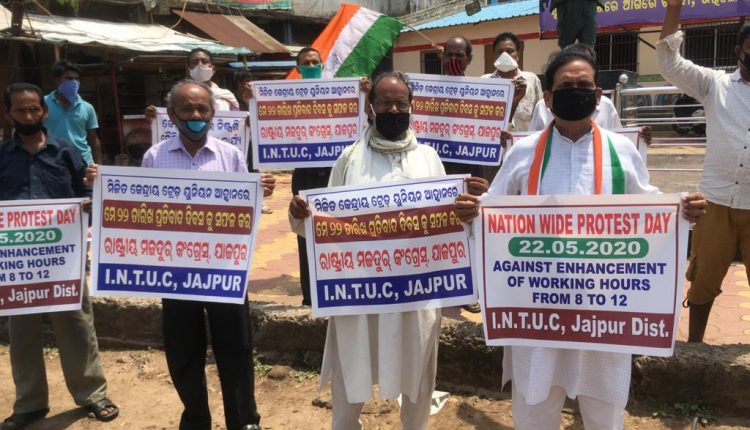 Jajpur: Center and state governments to change labor laws from 44 laws to 4 essence of adaptation. From 75 years to amend the name of incoming labor law has been conventional by 4 codes which was approved in. To the Labor Disputes Act 1947, the Wages Act 1934, the Compensation Act 1993, the Construction Workers Act 1996, the Dadan Workers Act 1979, and the International Labor Law 1976, respectively. Change the Factories Act, 1948, Article 51 to abuses by employers mean that a worker for increasing that to work 8 to 12 hours with the order. The government of Gujarat, Madhya Pradesh, Uttar Pradesh, Bihar, Haryana, Rajasthan, Himachal Pradesh and Maharashtra has agreed to implement the order immediately.

In protest, the Jajpur District INTUC today called for the immediate withdrawal of 12 hours of work by the Jajpur District INTUC in protest, protest and satyagraha on behalf of the entire Union Central Trade Union. The workers demanded the immediate withdrawal of the strike by the central and state governments in the wake of the protests and mass protests. The protest rally was attended by INTUC district president Vidyadhar Mohanty, vice-president Raghunath Majha, Niranjan Parida, editor Narsingh Charan Pahi, Bijay Kumar Boitai, construction workers union secretary Madhav Mohapatra, Dhuren Mohanty, Bharat Sahu, Ganeshwar Nayak, Mohammad Sabir, Abhimanyu Patra, Shatrughan Malik, Manoj Das, and others Chiefs at various points in the leadership, the government reacted strongly to the current BPV, strongly criticizing the move as anti-workers.

Facebook
Twitter
Pinterest
WhatsApp
Previous articleTributes and blood donations on the day of Rajeev Gandhi’s martyrdom on behalf of the city congress
Next articleTwo diamond traders arrested, 125 diamonds were seized