The Chief elections officer gave important information about the by-elections 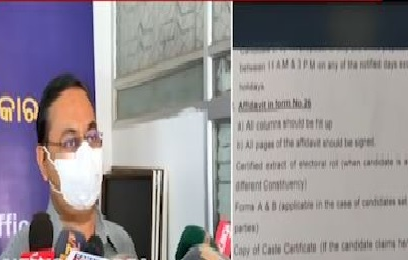 Bhubaneswar: Chief Election Officer SK Lohani today gave an important information on the by-elections in covid. “We are preparing for the Lovable Safe election,” he said. There will be 2 more candidates with the candidate at the time of filing the nomination. You can use 2 carts when submitting nominations. Nominations can be made to maintain social distance in large halls. Cobbled rules will be followed during the election campaign. ‘

“A maximum of five people can be heard from house to house,” he said. Western soil can only be found in designated areas. No more than 100 people will be able to attend the meeting in the west. Even when voting, the law of loyalty will be observed. This time, the number of booths has increased by 40 to 50 percent. Voting is open from 7 a.m. to 6 p.m.

Dibyang, who are over 80, can also vote in the post ballot. Interested people can vote for a form-stealing tax. Go to the homes of these people and bring in special team forms. The security team will go home to vote from the 20th to the 30th. Voter turnout will be spent outside the booth. Voters will be given gloves. The mask will be given and sanitizer. If the voter body temperature rises, they will finally vote.

Two by-elections have been announced in the state. Election trumpet for Balasore Sadar and Tirtol assembly seats. The announcement for the by-elections was released today. Candidates can submit nominations by October 16. Nominations will be verified on October 17. October 19 is the deadline to withdraw your candidacy. Candidates have been instructed to submit their submissions between 11 a.m. and 3 p.m. Baleshwar Sadar and Tirtol by-elections have been announced on 3rd of next month. The vote will then be counted on November 10.