Home News CBNAAT HAS STRENGTHENED THE FIGHT AGAINST TB AS INDIA AIMS TO ERADICATE...
NewsHealthOdisha 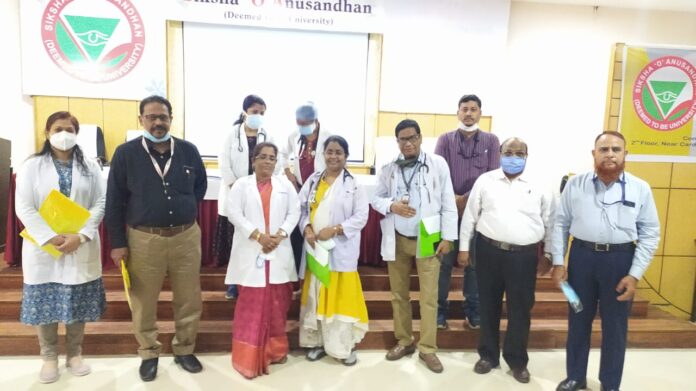 Bhubaneswar, Feb. 23: Use of Cartridge-based Nucleic Acid Amplification Test (CBNAAT) machines have greatly strengthened the battle against tuberculosis (TB) in India as the country aims to eradicate the killer disease completely by 2025.

“CBNAAT has come as a boon for treatment of tuberculosis and all the districts of Odisha have at least one such machine in place which can diagnose drug-resistant TB within a few hours,” Dr. Paresh Mohanty, Senior Consultant Microbiologist, Integrated Reference Laboratory (IRL) at the S.C.B. Medical College and Hospital at Cuttack, said on Tuesday.

While the World Health Organisation (WHO) had fixed a target to eradicate TB from the face of the earth by 2030, the central government was taking steps to wipe out the disease from the country five years earlier, Dr. Mohanty said while speaking at a Continuing Medical Education (CME) program organized at the Institute of Medical Sciences and SUM Hospital here.

Dr. Mohanty said that 2.7 million of the world’s 10 million patients lived in India of whom 64 percent received treatment in hospitals and wellness centers in the private sector which significantly contributed to the health care service delivery system in the country.

“But very little information about TB patients from the private sector facilities were percolating down to the NTEP and the government was unable to notify those patients. It makes detection of cases at the national level difficult,” Dr. Mohanty said.

He said that private sector healthcare institutions could make use of CBNAAT facilities available in public sector hospitals and healthcare centers free of cost which would greatly assist in the ongoing battle against the disease.

Medical practitioners were battling the disease as delay in diagnosis of drug-resistant tuberculosis could result in death. Various forms of drug-resistant TB had emerged over the years through several newer drugs like Bedaquiline and Delamanid had been introduced to counter the same, he said.

Facebook
Twitter
Pinterest
WhatsApp
Previous articleLaptop Tips And Tricks Anyone Can Use
Next articlePatanjali versus IMA: Balkrishna guards Coronil, needs specialists’ relationship to pull out comments