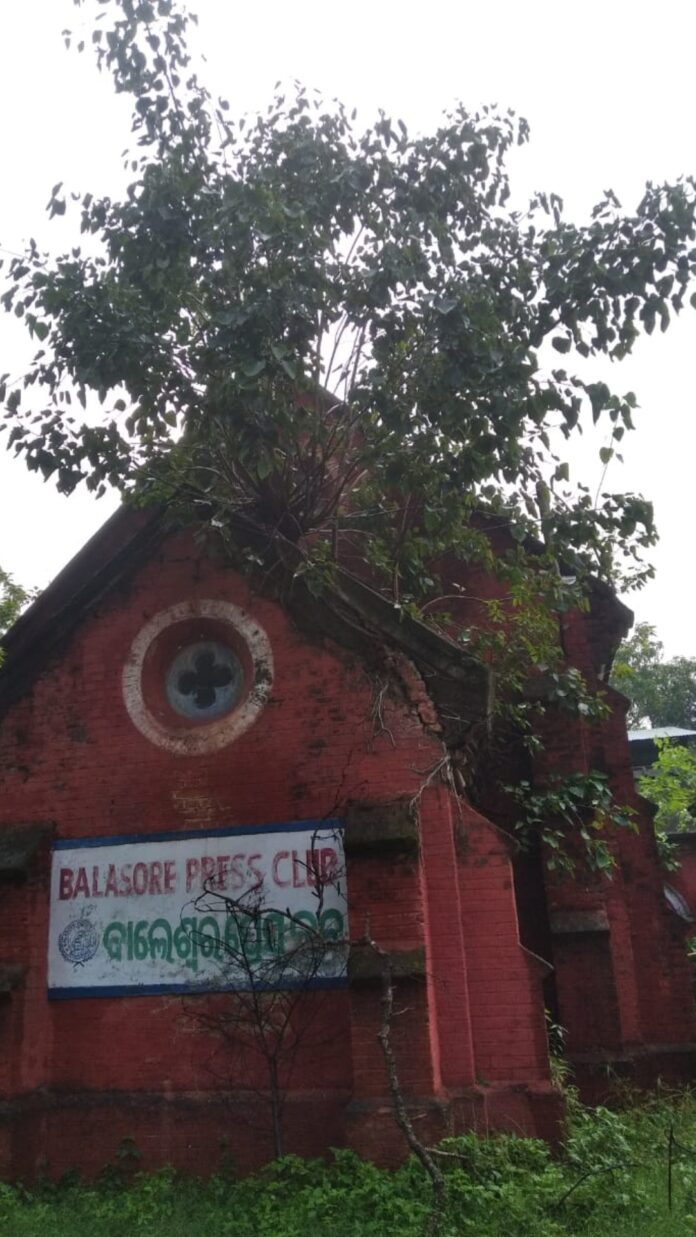 Lal Girija: The Oldest Church of Odisha on the verge of collapse :  Anil Dhir

Balasore : The oldest Catholic Church of the state, Lal Girija in Balasore, is on the verge of collapse. The general decay with plaster falling off, termites on the wooden roof rafters and vegetation growing from the walls and on the roof is cracking and splitting the walls. In a recent inspection of the site by Anil Dhir, Deepak Nayak and Architect Satyam Jyoti it was found that the structure is in a very precarious and delicate state. The threat of one of the tall trees falling on the structure exists, as the region is cyclone prone.

No steps have been taken to preserve this heritage structure in the last few decades even though it is just a hundred metres away from the Balasore Collector’s residence and just opposite the Revenue Inspectors office. The Church now functions as the Balasore Press Club, something which cannot be explained nor understood.

The history of the church is intricately linked with the advent of Christianity in Odisha. After the discovery of the sea-route from Europe to India by Vasco de Gama in 1498, the Portuguese traders played a vital role in the beginning of Christianity, particularly in the Balasore region. By 1514 C.E., they had made a settlement at Pipili, and ancient port at the estuary of the Subarnarekha. The Augustinian Missionaries from Goa began to visit Pipili from 1535 C.E and had built a small church dedicated to Our Lady of the Holy Rosary in 1606 C.E. By the end of the 17th century, Pipili became a strong Catholic centre which spread to the neighboring town of Balasore. In 1625 C.E., the port of Pipili was destroyed in a catastrophic cyclonic storm, many of the ships that were anchored sunk and the warehouses and buildings were destroyed. The merchants moved to neighbouring Balasore, the Augustinian Missionaries too followed them. By 1640 C.E., they had built another Church in Balasore, a replica of the one that had been destroyed. Gradually, the number of Catholics in Balasore diminished as most of the Portuguese had left for other places. During the latter part of the 18th century, very few Catholics were left, so much that the Church was closed in 1832. The church and its property were handed over to the local Zamindar for safe custody.

In 1864, Fr. Delpelchin S.J., the Superior of the Bengal Jesuit Mission came to Balasore and found that the few remaining Catholic families there had had no visit from any priest for the preceding several years. He returned to Calcutta with firm determination to help the faithful and appointed Fr. Sappart S.J. as the resident priest of Balasore in 1865 C.E. On reaching Balasore, Sappart tried in vain to get the church back from the Zamindar, but was unsuccessful. He purchased another piece of land and built a fine Catholic Church which came to be known as ‘Lal Girija’ and was dedicated to St. Joseph. The church took six years to complete, and was modeled on the village churches of England. The small church was tucked away at the end of a short lane next to the residence of the Collector and the military barracks.

Located on a plot approximately one fourth of an acre, the Church is a synthesis of Romanesque and Gothic Style. The whole structure is built with fine warm-toned bricks, timber and lime mortar were used in the construction. The main hall was 50 feet in length and 20 ft wide. There were high circular windows on both ends of the church. The stained glass on the windows have since been removed, but in its original state the light streaming through the beautiful stained glass must have been a mosaic of colours. The Church was a solid and functional building built to last, and it has lasted. It has always been painted red, as the name signifies.

It has been many years since any prayer service has been held at the Lal Girija. The abandoned property was used as the Land Settlement Office for decades and later converted as the Balasore Press Club. Surrounded by tall trees, the small church has a picture postcard charm. The Press Club members have made some changes, a badminton court at the entrance and modifications in the interior. Many activities that should not happen in a church now happen in its hallowed precincts.

The Lal Girija may not be used as a place of worship today, but there is a pervading sense of calmness and peace which is awe-inspiring. Even after years of disuse, this abandoned structure still shows traces of its past grandeur. The Church needs immediate repairs. As one of the oldest surviving Church of the State, it should be declared a State Protected Monument so that its history and haunting beauty can be preserved for generations. The Christian community too should get involved and retrieve the Lal Girija from the authorities and restore it to its former glory.