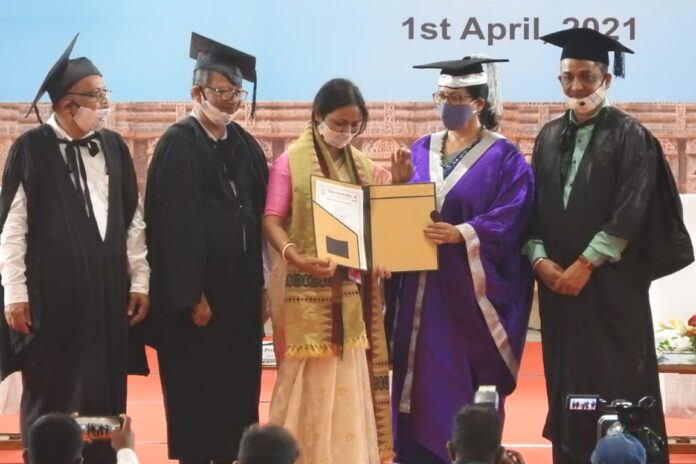 Bhubaneswar: Utkal University organized a pre-
convocation award-giving ceremony today for the academic
session 2018-19. Prof. Sudhakar Panda, Director, National
Institute of Science Education and Research (NISER) graced the
ceremony as the Chief Guest and awarded the degrees. The
ceremony was held in the new convocation hall of Utkal
University. Due to the pandemic situation, the convocation
ceremony was not held last year. Hence, a pre-convocation
the ceremony was decided to be held to distribute awards for the
last year. A total of 127 Ph.D. degrees, 2 DLitt, and 100 Gold
Medals were awarded during the function.
Prof. Sabita Acharya, Vice-Chancellor, Utkal University
presided over the ceremony. Dr. Basant Kumar Mallik,
Chairman, Post Graduate Council gave the welcome address,
and Dr. Avaya Kumar Nayak, Registrar, Utkal University
presented the University report at the ceremony.

Congratulating the University and its students, Prof. Sudhakar
Panda said, the first university of the state, Utkal University has
significantly contributed to the field of education and research
climate of the state. He urged the students to cultivate the
courage to do the right thing, develop an analytical mindset, and
said bigger responsibilities await them., the responsibility to lay
a solid foundation for the next generation. to thrive. &quot; A degree
should not be treated as a paper to land a job and secure a
handsome salary. Knowledge should be the driving force at all

times, &quot; said, Prof. Panda. Imagination is a powerful thing and he
urged the scholars and gold medalists to use their imagination
for nation-building.
Prof. Sabita Acharya began her address by paying tribute to all
the great personalities, Utkalmani Gopabandhu Das, Utkala
Gouraba Madhusudan Das, and many more who were
instrumental in creating Odisha as an independent province and
establishing the identity of Odias on the auspicious occasion of
Utkal Divas. Utkal University was formed seven years after the
formation of Odisha as a separate province. &quot; Currently, in her
78th year, Utkal has always aimed towards building morally and
socially responsible citizens for the country,&quot; She spoke about
the various milestones achieved by the university including
securing 100 Cr funding through RUSA, various MoUs signed
with many international Universities through the International
Office. Speaking about the research scenario at the university,
she spoke about the 11 Centre of Excellence established under
RUSA and World Bank&#39;s OHEPEE project. Last year Utkal had
secured the 96th rank and found a spot in the top 100
universities of the country in the NIRF ranking system. &quot; We are
aiming to place Utkal in the top 30 universities of the country
and working tirelessly towards it,&quot; said, Prof. Acharya.
Prof. Basant Kumar Mallik gave the welcome address and
introduced all the guests to the audience. Remembering the
founding fathers of Odisha he said, &quot; Odisha was a dream and we
should all take a vow to make it into reality and take the state to
greater heights.&quot; Dr. Avaya Kumar Nayak, Registrar, Utkal
University presented the University report and in his address
paid tribute to the first Vice-Chancellor of Utkal, Dr.
Parnakrushna Parija, whose birthday also falls on the Utkal
divas. Dr. Sarat Kumar Majhi, Controller of Examinations
assisted Dr. Panda in conferring the awards and proposed a
formal vote of thanks.