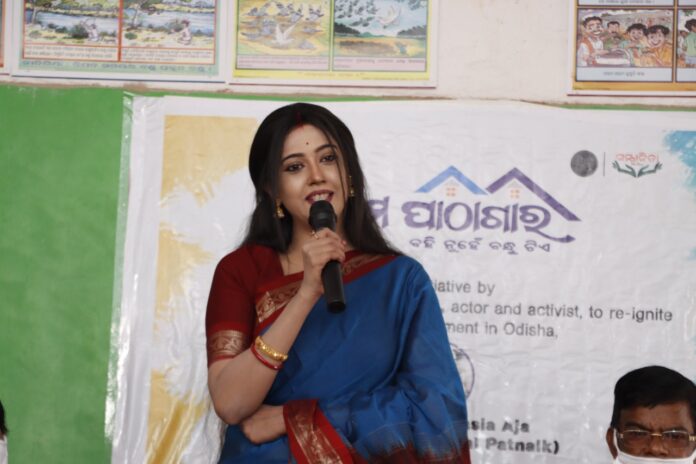 Bhubaneswar: The 3rd edition of “Ama Pathagaara” – an initiative by Ollywood actor and activist Varsha Priyadarshini was held in Government Primary School, Jagasara Adivasi Sahi, on Sunday, 11th April 2021. As part of the initiative, Varsha donated a cabinet full of a variety of books, ranging from educational to children’s fables, to the students of the school.
Late Shri Dasarathi Patnaik, fondly known as Dasia Aja, was the pioneer of the library
movement in Odisha. Starting out with only 5 books in a trunk, Dasia Aja overcame poverty, little education, and lack of facilities during his lifelong journey to collect books, magazines, antiques, and other memorabilia. He eventually set up a museum cum library at his village in 1959, which now houses 1.5 lakh books and periodicals, palm leaf manuscripts, paintings, and other research materials.

Varsha Priyadarshini, through her initiative “Ama Pathaagaara,” is trying to re-ignite the library movement pioneered by Dasia Aja. Through the initiative, she plans to collect books and magazines from enthusiastic donors across Odisha and beyond, and donate them to
disadvantaged people, particularly children, all over the state. By doing so, she aims to
encourage the setting up of libraries in each district of Odisha, just as Dasia Aja had envisioned.
She has already collected and distributed hundreds of books through the initiative.
During the event, Varsha stressed the importance of education in a child’s life and
counseled all the students present to aim to complete their formal education at any cost. She also inquired about and empathized with the students’ predicament due to the situation brought about by the pandemic. The students in turn shared their dreams with the actress and also delighted her with a couple of cultural performances. All Covid19 related precautions mandated by the state government were strictly followed during the event.

Facebook
Twitter
Pinterest
WhatsApp
Previous articleMcDonald’s India to work day in and day out for contactless McDelivery in Mumbai
Next articleSpectacular Achievement by NABARD in Odisha with Financial  Assistance of Rs 22,709 crore during 2020-21