Video conference with Odiyas regarding Corona pandemic for development of Odisha: Dharmendra Pradhan 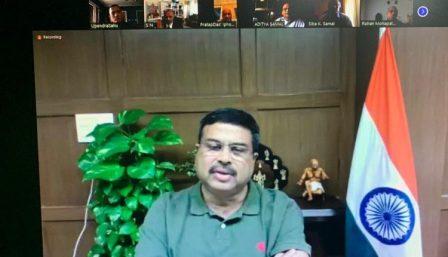 New Delhi / Bhubaneswar – Union Minister Dharmendra Pradhan has held a lengthy video conference with many prominent Odiyas living in the United States during the corona epidemic. This video conference was going on for long time in the US Odiyas coordinating the factors of the corona pandemic. Ordinary Odiyas living in eight major U.S. cities, including Houston, San Francisco, California, Washington, Florida, Minnesota, Alabama, and New York, had a video conference with Mr. Pradhan. Talking to Odiyas living in the United States, Mr. Pradhan said that, whether in the twentieth century or the first two decades of the 21st century, Odiyas are at an important point in India and the world at this time. This is a great time to work for Odisha and serve Odisha. Mr. Pradhan said the Oriyas are in a serious position in the central government. There are Oriya people in California, in the United States, the Odiya-speaking people play an important and influential role in the economy and the economy there. Odiya people have played a very influential role in Southeast Asian countries. The Gulf states are at the forefront. “Historically, the Oriya people have never been in such a privileged and important place in the country and abroad,” he said during a meeting with the Odiyas in the United States. It’s time to dump her and move on. Mr Pradhan said working with Odisha was important. “While many Odiyas are in important positions at home and abroad, Orissa will not be employed during the coronation,” he said. He said investment in India would increase in the coming days and Odisha would also benefit. On the other hand, despite all the challenges, the chariot construction work has been carried out by maintaining social distance in the state. The Government of India attaches great importance to the lives and liabilities of both peoples. Today the country is one. “With the blessings of Mahaprabhu Sreejagnath and the cooperation of all, Odisha will develop,” he said. During the talks, Odiyas who want to come to Odisha will be brought directly to Bhubaneswar, and there will be medicine for the elderly in the United States, as there is no Korean service. The issue’s end has the recaptured Doomsday in the control as there is no medicine involved. Oriya individuals emphasized on employment of young people in Odisha and training of young people to increase their skills and employ them in various fields. The Odiya people opened that the state needs to develop and invest youth. They also praised the efforts of the central and state governments in the fight against corona. The meeting was coordinated by Manoj Mohapatra, senior official of the Indian Embassy in the United States. . Devonanda Pati, Upendra Sahu, Aditya Samal, Kuku Das, Devdat Das, Devdat Das, Aru Sushant Patnaik from California, Siba K, Samal, Srikkanth Nayak, Karthik Pradhan, Pratap from Washington, DC, from Hatron. Das, Manoj Mohapatra, Pradeep Jena from Gloria, Dr. SK Das, Bhagwat Sahu from Alabama, Divyajiban Mohapatra, Vijay Mohanty from New York, Laltendu Mohanty and Brajraj Santi are the prominent participants.

He spoke in support of the US Alliance, but said that maintaining some independence was important. Every effort is being made to benefit all Odiyas living in the United States. They opined to come forward for the help of the Odiyas.

Bhubaneswar: The Post-Graduate Department of Transfusion Medicine at the Institute of Medical Sciences and SUM Hospital here became the first medical institution in Odisha to introduce...
Read more
Uncategorized

Mumbai: Shiv Sena not to challenge Bengal surveys, The Shiv Sena has chosen to quit the impending West Bengal Assembly races, however, the gathering...
Read more