When will the BJD office be sealed – MP Aparajita Sadangi 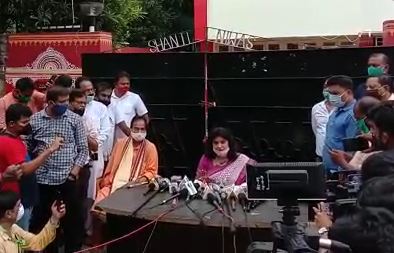 Bhubaneswar: Press meeting of Bhubaneswar MP. Bhubaneswar MP Aparajita has filed a counterclaim against the BJP after conducting a search and seizure of the BJP’s code-breaking office, alleging that she had violated covid rules by showing 17 photos and one video as evidence. The Bhubaneswar MP has openly questioned when action will be taken against the leader for violating the covid rules and when the BJD office will be sealed during the air program held at the BJD party office. He said that during the last march of Maharashtra on September 3, at the BJD party office, on the occasion of Gandhi Jayanti, the BJD state office, the BJD walk in the Gop block, the blood donation program on behalf of Odisha My Family at the Jeevanbindu program, the birthday of Chandbali MLA Bomkesh Roy. He also testified in front of the media that Pradeep Maharathi, a Bhubaneswar-based legislator Sameer Ranjan Dash also showed up without mask. Even if BMC sealed the office, she will work outside.